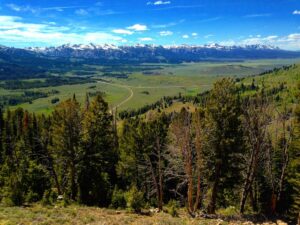 The Sawtooth Valley begins south of Galena summit and extends north to Stanley.  The imposing Sawtooth Mountains are to the west and the limestone peaks of the White Cloud Mountains are visible behind the valleys to the east.  The Sawtooth Scenic byway passes right through the center of these mountain ranges as the Salmon River continues to carve its path through the valley, crossing the highway several times.

The Sawtooth National Recreation Area (SNRA) was established by Congress in 1972.  It was created to protect and preserve 756,000 acres of natural, scenic, historic, pastoral, fish and wildlife values.  The SNRA encompasses the Sawtooth, Boulder, White Cloud and Smoky mountain ranges.  There are over 700 miles of trails, 40 peaks over 10,000 feet and over 300 alpine lakes.

Glacial moraines created spectacular lakes, accessible by car, within the valley.  The most popular are Alturas, Petit and Redfish Lakes.  Each lake is perfection in its own right with the skyline of the Sawtooths as the backdrop.  Trails lead to alpine lakes that will blow your socks off.  So lace up your hiking boots (pack extra socks!) and step into this unparalleled wilderness.  Decide for yourself if the alpine lakes outshine the Sawtooth Mountains. 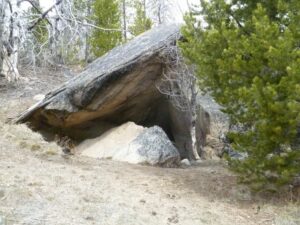 Archaeologists found artifacts at the Redfish Creek Rock Shelter dating back 10,000 years.  Pre-historic man may have been using this shelter when hunting.  Fast forward to the late 1870’s:  The Sheepeater Tribe used the shelter during hunts when they were in the Redfish Lake area.  These Native Americans from Shoshone traded furs and meat with other inhabitants, but did not play well with others.  Chaos amongst the Sheepeaters and settlers forced the tribe out of the area leaving behind their footprint of faded pictographs on the ceiling of the shelter.

Back in the day, mining was a way of life.  Fearless men flocked to remote places with nothing more than the clothes on their back and visions of seeking fortunes of wealth and power; most were forced to be content getting by on their daily earnings.  Mining in the Sawtooth Valley was no different. 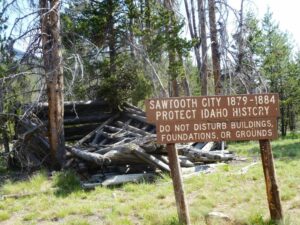 Follow Smiley Creek Road to the ghost town of Vienna.  From 1879 – 1886, this silver/lead mining town was the largest in the Stanley Basin with over 200 buildings.  It even published its own newspaper, The Vienna Reporter.  Today, there is only a pile of rubble left in its memory.

Sawtooth City was officially organized in 1879 and deserted by 1888.  At its peak, it boasted 600 townies along with the necessities of small-town living including three saloons.  A reminder of this gold mining camp is marked by remnants of the mill’s foundation and one run-down cabin. 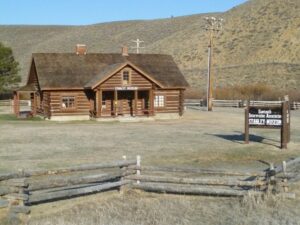 Stanley’s history is portrayed through artifacts and photographs at the Stanley Historical Museum.  The museum is housed in the Valley Creek Ranger Station that was built in 1933.  Lavish stories from the eclectic miners, ranchers, explorers, Native Americans and fur trappers who have traveled through or homesteaded in Stanley are held within the walls of this museum.

Take a walk into Stanley’s past through a self-guided tour beginning at the Community Center.  It won’t take you long to cover the .6 square miles of the four unpaved streets of Stanley.  The view of the Sawtooth Mountains from the playground will have you teeter-tottering and swinging for hours!

The history of the Sawtooth Valley is embedded in the landscape and shared through stories passed on to the next generation.  But it’s the valley’s rugged natural beauty, recreational activities and unique heritage that entice visitors to the valley and keep them coming back season after season.

The Sawtooth Valley Bragging Rights and Random Facts continues in the next blog focusing on recreational activities, flora and fauna.  Here’s a glimpse into the Sawtooth wilderness.